The presence of noncondensable gases in a steam system decreases the vapor pressure and thus decreases the temperature. Heat transfers are limited, so the pressure of the exchangers must be increased to obtain the same temperature. Therefore, it costs more fuel to heat the product. In addition, the presence of noncondensable gases increases corrosion, resulting in costs associated with over-consumption of anti-corrosion products and frequent repairs.


What are the incondensables gases?

We group all the noncondensable gases into the word "air". These gases are called "incondensable" because the cryogenic temperature (about -150 oC) is necessary to condense.

Where do they come from?

Finally, air can enter the system and dissolves in the feedwater. At 80oC, water can dissolve an amount of air corresponding to about 0.06% of its volume. Carbon dioxide has a higher solubility, about 30 times than oxygen. When the water is heated in the boiler, the gases are released with the steam and carried into the distribution network. Since air is present everywhere, in all systems, it is necessary to provide for the effective elimination of noncondensables throughout the process.

What are the impacts of noncondensable gases?

A part of the oxygen turns into oxide and rust with the metal of the system. Calcium (or magnesium) bicarbonate of water hardness is the main source of carbon dioxide (CO2). Water treatments remove calcium, but leave bicarbonate. As a result of the chemical reactions that occur in the boiler, it releases CO2 which diffuses in the system with the steam. In contact with water (condensate), the carbon dioxide degrades to carbonic acid which attacks the steel of the pipes and equipment.

Oxygen is the main cause of corrosion in steam systems, but if carbon dioxide is also present, then the pH will be low, the water will tend to be acidic, and the corrosion rate will be high.

Figure 2. An insulating layer formed of a mixture of air and steam.

Air, including nitrogen and other gases, is the best insulator, or the worst conductor: 1/100 inch of air isolates as much as 11 feet of copper, 15½ feet of steel or 1/5 inches of water. That's why all good insulators contain air. Knowing this, it is easy to see why it is very important to remove the air that could concentrate on the heating surface of the heat exchangers.

Figure 2 shows how the steam must pass through a layer of air before condensing on the wall of an exchanger, which slows down the heating process.

The following equation illustrates this phenomenon:

If there is no air in the vapor, Pt = Pv. At a pressure of 100 psig, the steam table tells us that the temperature is 170 oC. If the vapor contains 20% air, then 100 (Pt) = 80 (Pv) + 20 (Pg) and the temperature that corresponds to a vapor pressure of 80 psig is 162 oC. Therefore, increasing the heat exchanger pressure to a temperature of 170 oC and heating the product to the desired temperature involves higher fuel costs.

If noncondensable gases accumulate unevenly on the heating surface of an exchanger, a non-uniform temperature on the product side of the surface results. Eliminating non-condensable gases from heat exchangers can have a positive impact on the quality of the product. This is especially critical with exchangers such as rotary dryers and hot plates, for which an extremely uniform heating surface temperature is essential to obtaining a quality product. The uniformity of temperature is also important for many liquid products. 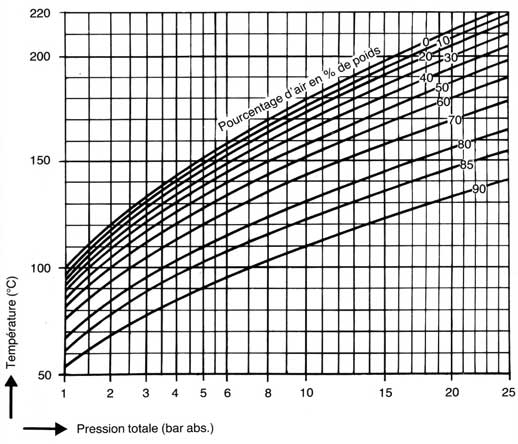 Figure 3. Temperature of steam as a function of pressure and air concentration. 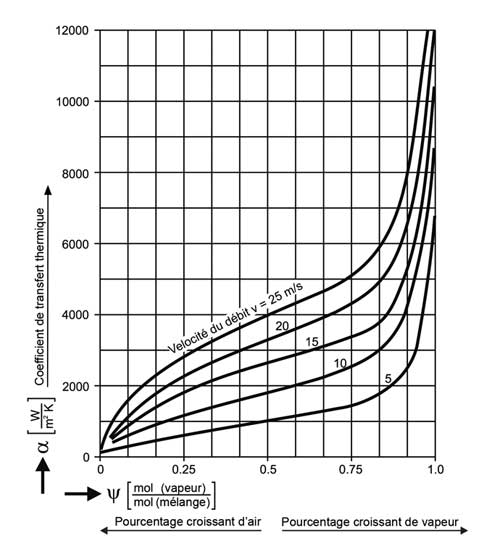 Figure 4. Thermal transfer coefficient as a function of the percentage of air.

The elimination of noncondensable gases is ideally a combination of mechanical and chemical methods. Lalonde Systhermique team uses a four-step strategy:

Return a maximum of condensate

As the condensate is already hot, deaerated and chemically treated, returning a larger amount to the boiler will have a significant impact on costs. A higher proportion of returned condensate implies less water treatment and, more importantly, less fuel consumption at the boiler. In Lalonde Systhermique Steam Condensate Closed System (SCCS®), all the condensate is returned to the deaerator or boiler. In addition to fuel savings, this means a drastic reduction in water treatment costs.

The water exposed to air becomes saturated with oxygen, and the concentration varies with temperature: the higher the temperature, the lower the oxygen content. In conventional vapor networks, the first step in removing noncondensables gases is to preheat water in a boiler feed tank to remove oxygen. In general, the tank is maintained at a temperature of 85°C to 90°C and is equipped with a vent open to the atmosphere. This practice does not deaerate optimally and generates significant energy losses since the steam used to heat the water escapes through the vent. Whenever possible, it is preferable to replace the boiler supply tank with a pressurized deaerator so as to achieve a more complete elimination of the noncondensables gases and a higher energy efficiency. 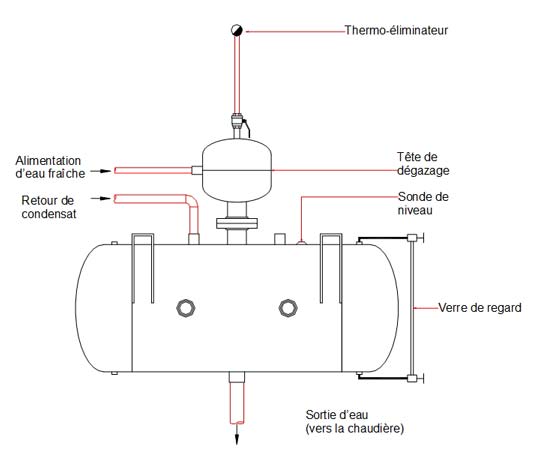 If a liquid is at its saturation temperature, the solubility of a gas in the liquid is zero, but the liquid must still be agitated strongly or boiled to be completely deaerated. This is what happens in the head of a deaerator where the water is separated into as many droplets as possible and surrounded by a cloud of steam. This generates a very high surface to mass ratio and causes rapid heat transfer from the steam to the water, which quickly reaches the saturation temperature. The dissolved gases are released and driven with excess steam to a vent attached to the top of the deaerator (the addition of Lalonde Systhermic thermo-eliminator allows the air to exit while preventing steam from stirring, escape). The deaerated water falls back into the deaerator tank. A layer of steam is held above the surface of the water to ensure that the air is not reabsorbed.

In most plants, existing chemical treatments are appropriate. Historically, it is on the mechanical design that the conventional solutions are not optimal. There is a limit to what can be achieved through chemical treatments alone. The mechanical removal of oxygen and carbon dioxide radically reduces the consumption of corrosion control chemicals. In many of our projects, the reduction is more than 50%. It should also be noted that in many plants, water treatment plants are operating at full capacity, demonstrating the importance of eliminating mechanically noncondensables gases as much as possible.

INSTALLING MECHANICAL VENTS ON THE SYSTEM

The use of a pressurized deaerator and chemical treatment is not sufficient to ensure the complete elimination of noncondensable gases in the steam system. Inevitably, noncondensables gases will accumulate in the heat exchangers if nothing is done to prevent it. Eliminating the noncondensable gases improves heat transfer and helps ensure a uniform product temperature.